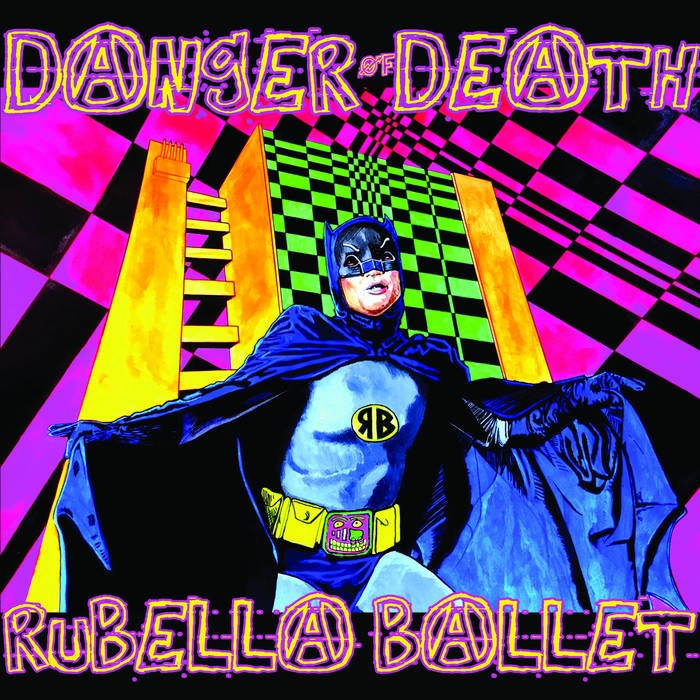 winopunk Bit different from the ballet, but I like it a lot they rarely disappoint and this is no exception.

Now, four years on from Planet Punk, Rubella Ballet have built upon the edifice of resistance defined within the grooves of Planet Punk, recording their latest studio LP, Danger Of Death, which will be available via Overground Records from late Summer 2018.

Heralded by the singles compilation, Day Glo Daze, to be issued on Last Hour Records summer/fall 2018,

Danger Of Death throws the pure light of reason on a modern world torn asunder by forces that seek to control, obfuscate and exploit.

A lambent beacon of pure ultraviolet truth, shining vividly against a backdrop of fake news and government lies, Danger Of Death features material that confront today’s issues with honesty and defiance.

Pre-orders taken here in advance will be delivered a week before the official date.

1st review by Louder than WAR on-line magazine
Rubella Ballet have been a staple of the UK punk scene for over 3 decades. With their dayglo antics and flourescent stage lighting they literally stood out – especially when colour had virtually drained from the punk scene. Like them or hate them, you could not ignore them. My record collection stands as evidence that I fell into the former camp. As with the previous excellent Rubella Ballet release, Planet Punk, the band is reduced to former drummer Sid Truelove on all instruments and sharing vocal duties (occasionally) with Zillah Minx. Without Zillah it just wouldn’t sound like Rubella Ballet…

If you’ve heard Planet Punk that is a good stepping off point. As you would expect, the music has 2 feet firmly planted in punk rock but there is a healthy dose of the avant garde. The Rubella Ballet sound of 20 years ago seeps through here and there (e.g. Cradle To Grave, Terminator Technology) but overall it is very different from RB of the past. The drum machine, frequent samples and metal riffing gives this an industrial flavour, while there is something in the rhythmic nature of the tunes, keyboard and often deadpan vocal delivery that is very space rock. On that point the back cover is very sci-fi/space rock. Whilst RB have always been dayglo I wouldn’t call this psychedelic but perhaps psycho-punkadelic. The best comparison I could come up with is a punk rock version of Ministry meets Hawkwind with a touch of Pop Will Eat Itself. That doesn’t seem sufficient as there are some inventive little twists here are there – such as the way Crash and Burn borrows the intro from Metallica’s version of Diamond Head’s Am I Evil – which itself was half inched from Gustav Holst’s Mars.

It’s with fear for their reputation that I say this album comes across as a revelation of conspiracies. Rubella Ballet have their sights firmly targeted at the injustices perpetuated by the government, corporations and economic system but in this modern day of fake news and internet loons anyone pointing the finger can be instantly written off. Loony conspiracy theorists lurk across the internet. They present their nonsensical rubbish which is easily debunked (e.g. Sandy Hook shooting being staged) and in the process, by association, tar anyone else who uses that C word as a tin foil hat wearing loon disconnected from reality. This, yer conspiracy nut will tell ya, is how they keep the people down. Unfortunately it is the dirtying of the waters by conspiracy theorists that enables any revelation of the real conspiracies to be played down as the ravings of lunatics. There is no literal shadowy cabal meeting up and planning individual acts, but there are a group of people acting in concert towards shared aims, broadly consolidating power, wealth or both. Take capitalism – arguably a silent conspiracy by the owners of wealth to concentrate it and increase it at the expense of those who really create it. People’s lives ARE being shortened for the calculated pursuit of profit. Our rights ARE being destroyed to increase the bottom line. Take government – of whatever hue: a means to control the people and, in this country at least, protect the interests of share holder capitalism profiteering at the expense of human lives. Unfortunately the far right US “libertarians” living in their stockades with more guns than days of the year are vying for ownership of that theory!

Some of the songs are fairly straightforward anarcho-punk protest songs. Don’t Take Our NHS Away does what it says on the tin. Don’t Eat The Dead is a pro vegetarian, pro ALF song. They also take in zero hours contracts, people fucking with our environment, the increased use of drones and the Grenfell tower disaster. Check out the video for Tower Block Terror available via their Facebook page:

But in some of the songs, science fact meets science fiction testing out alternative futures – songs with titles like Robot Dystopia, Genocide Agenda, Terminator Technology that tell of RFID implants and killer robots. And while chilling, some of these scenarios have been written about as distinct possibilities by genuine scientists as well as paranoiacs. And if you have a think about songs such as Genetic Engineering by X-ray Spex they’re not the first punk band to test this stuff out as song material. Crash and Burn is where it goes totally sci-fi and I think I’ll just leave it at that.

While not the standout song musically, my favourite is probably Gender Control. They have written a lyrical collage borrowing from Xray Spex and Poison Girls (and even the Pistols!) to create a new song. The opening vocal is somewhat disturbing, bouncing between pleading child and baby dalek. Telling Sid and Zillah’s own story in the wild world of punk, whilst sticking 2 fingers up to sexist attitudes, the song is dedicated to Vi Subversa and Poly Styrene. it’s important on so many levels. And while I’m at it, make sure you check out Zillah’s film “She’s A Punk Rocker”.

Musically I think this will be a bit of a Marmite release – dismissed by some and embraced by others. Depending on your viewpoint, the album veers between (accepted) reality, warnings of a dystopian near future and paranoia. I am taking it as the warning. Whatever you do, though, don’t play it to anyone who is already signed up to all the conspiracy theories cos this might just blow their mind.```