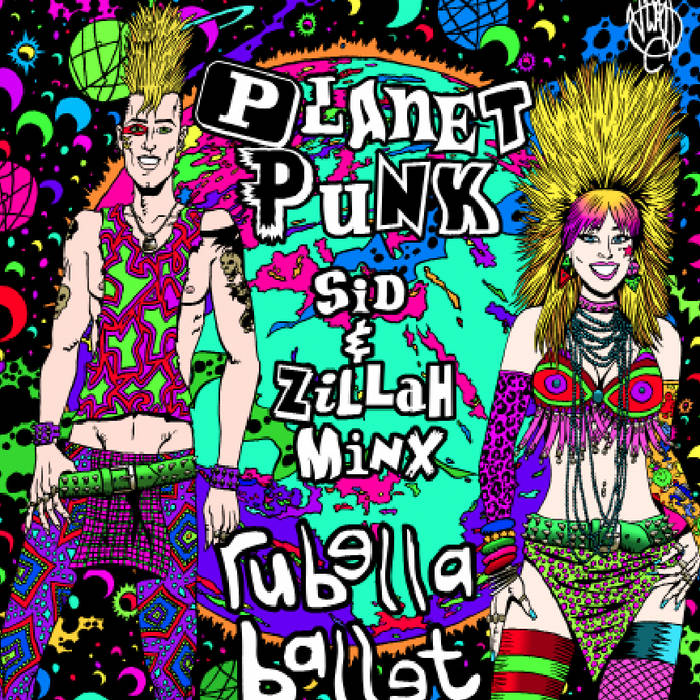 ₴₡₳₮₸€₹ I love the chorus: "Run, run you government scum. The banks will fall; your time has come." Makes me feel like punk is on the march, instead of just the pointless internal feuds (at least that's most of where the energy seems to go here in the States, lately). We need more of this spirit. Favorite track: Run Run.

Euan Shanks Because this is a great album by one of my favourite bands Favorite track: Planet Punk.

Here, both the medium and its message are rendered with skill and passion to produce an album that equals, and in some respects exceeds, the best of Rubella Ballet’s back catalogue. In particular, Sid’s abilities as a multi-instrumentalist and producer are made manifest, while Zillah’s vocals display impressive authority across several of ‘Planet Punk’s 15 tracks. Providing a neon-lit route map of post-millennial oppression and exploitation, the album hits its lyrical targets with precision. While the pedantic may decry Rubella Ballet’s evocation of the term ‘illuminati’, this is simply semantics: Illuminati, Babylon, the System, call it what you like – whichever way you cut it there are people out there whose prosperity depends upon our oppression and exploitation – and they mean to ensure it stays that way.
‘Planet Punk’ opens with its eponymous title track. A celebratory statement of identity and defiance that delineates a lifetime’s commitment to anarchy, peace and freedom across the backdrop of some genuinely visceral fuzz overload. ‘All Potential Terrorists’ uses sampled soundbites as part of a blistering sonic collage that seeks to expose the culture of media manipulation to which we are all subject. Here the layers of disinformation surrounding the 9/11 event are used to illustrate the kind of dynamic whereby considerable efforts have been made to ensure that the term ‘conspiracy theory’ becomes a synonym for fantasy – when the very idea that groups of individuals gather to conspire the fates of others is undeniably demonstrated by parliament buildings across the globe.
A techno-infused debunking of the banking crisis shell game, ‘Run Run’ is another track that is as rich in texture as it is in polemic intent. Exploring capitalism’s pride of place among the crippled pantheon of flawed ideologies that are presented as viable, it again exposes the media’s complicity in facilitating this particular global sting. ‘Killuminati’ detonates fat, jagged chunks of distorted guitar supported by jackhammer industrialisms to provide a sonic metaphor for the fury of the oppressed in the face of constant surveillance through apparently passive technologies. ‘Pandora’s Box’ moves its lyrical crosshairs to frame the manner in which the medical industries, while presented as benign, are a cornerstone of state control. Particularly prescient at a point in time when the Health Service is collecting and processing ever more data on those who fund it, the track showcases Zillah’s unique voice and provides more evidence of Rubella Ballet’s glorious unorthodoxy with a song that slithers hypnotically over its carefully constructed aural architecture. ‘Anonymous’ provides an understated summation of 21st century dissent; reflecting our nascent dystopia, while asserting that opposition is unstoppable so long as sufficient will exists to support it.
Based upon Sid’s bitter experiences during his treatment for leukaemia and myeloma, ‘Hellbilly Heroin’ juxtaposes churning ramalama punk against a description of the manner in which laws are used to enforce the prescription of certain treatments, while prohibiting others as a means of strengthening the bonds between government and commerce. Based upon a lyric initially written by Zillah during the 1980s, ‘Bio Hazard’ echoes the concepts found in ‘Killuminati’, exposing the wider ways in which technology is being used as a control mechanism. Glittering and transcendent, the song detonates into a savage guitar firestorm. The soaring, bass propelled ‘Silver Or Lead’ uses the example of CIA drug running to explore the roles played by secretive government agencies and the manipulation of those who are cowed into compliance while highlighting the self-evidently absurd promotion of violence as a solution for perceived ‘drug violence’.
Possibly the album’s standout track, ‘Wonderful Life’ essentially serves to expose the way in which governments ruin lives. An undeniable endorsement of the idea that by and large, we are all worse off for the existence of government, the song sees Sid generate solar winds of flange that are drawn into a superdense collision between processed analogue and digital sounds. While ‘You’ll Be Sorry’ demands a reckoning with clarity and punch, ‘Sedition’ recalls the industrial power of groups such as Ministry to expel its portentous urgency and white hot rage across superheated waves of thunderous guitar.
‘Victory For The Victims’ uses a bass driven narrative to drive a sonic collage detailing the police/media cover-up of the 1989 Hillsborough disaster, where 96 football supporters were killed during an FA Cup match between Liverpool and Nottingham Forest. Effective and affecting, it again exposes the symbiotic relationship between those who govern and those who report upon that governance, and asks the always pertinent question: ‘who watches the watchmen?’ ‘Vampire Wedding’ extends the metaphor of a parasitic monarchy through the prism of a twisted nursery rhyme driven by unsettling subsonics, before ‘Starship Transporter’ closes the album by taking to the stars in search of freedom. With Zillah’s vocals at times reminiscent of Gilli Smyth, the track is a valedictory departure from the planet that explores the notion of transcending conditioning through personal discovery. While a six-minute slice of spacerock isn’t what you’d necessarily what you’d expect from Rubella Ballet, the song works within the context of an album that sets out the entire scope of Sid and Zillah’s idealism.
Whatever expectations you may have about this album, be prepared to have them both confounded and surpassed. ‘Planet Punk’ is not only a superb summation of everything that made Rubella Ballet unique but also takes the group into new, exciting realms. Explore with them.
Dick Porter -TrakMARX - March 27th, 2014