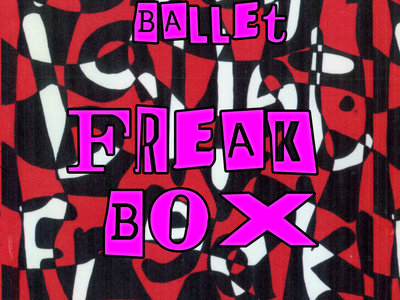 Growing up as an anarcho punk in the mid 80′s, I guess you could say that we shared a uniform with most of the bands that we listened to, which was all black everything. But there were two British peace punk bands that broke with the status quo, one of them being Rubella Ballet - instead of all black, they went for day-glo everything! This band was the total package, and their image was really important to them, but completely DIY because they made all of their own gear. Formed in 1979, their leftist bloodlines ran deep, and at one point they had members whose parents were the founding members of the Poison Girls. In the early 80′s, they released some 12 inches and albums, but it’s their 1986 IF record, released via Ubiquitous (their own label), which I’ll talk about with much joy today. I have always been into this band’s creative spirit since their first adventure into sound called Ballet Bag, but on IF, the band was able to bring together post punk, peace punk, subversive pop and even funk to manifest an audio terror that was disguised by many different faces. This record is a PLAYHOUSE of weird, blissed-out beats and rhythms that will have you moving. I have said it before, during the era when IF came out, we just didn’t have divisions along the lines of the sub-culture you belonged to – be it death rock, peace punk, post punk or just plain outcast, we were all in the same game. What really made Rubella Ballet all that and a bag of chips was how they never lost the knack for writing thought-provoking lyrics – they knew how to make revolutionaries smile while keeping up the good fight! The singer, Zillah Minx, had one of the coolest female voices in anarcho punk, all you have to do is hear her wreck shop on songs like “Cowboy Hero” – every time I blast this tune, fancy footsteps are not too far behind. When the bass line from “Red Alert” slaps you in the face, you will realize that change can come from music opening the minds of the BLIND. Rubella Ballet created a classic album with IF, but don’t take my word for it, go out and research it. This band proved that punk is not about the way you dress, it’s a state of mind. The craziest thing about Rubella Ballet is that on this album, the lyrics still ring true today – that’s how you know it’s a classic album. Rubella Ballet is still going strong today! So after the jump, check out Rubella Ballet (Freak Box 1984).
Filmed live in Heaven: 1984.
Original video from 1984 remastered for download
Running Time: approx 60 mins.

Available as a download, just send your email address with the pay pal payment and I will send the download as soon as I have received payment.