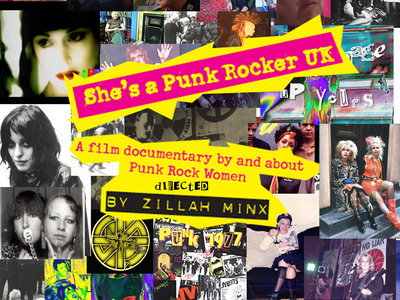 Julie Burchill writes exclusively about her part in She’s a Punk Rocker UK, a documentary by Zillah Minx When the ever-persuasive Miss Zillah Minx asked me to appear in her excellent documentary She’s A Punk Rocker I was not entirely convinced. For a start, I think back to the period of my life when I WAS a – shudder – punk rocker as the only time of my life when I knowingly practised hypocrisy: one of my very least favourite vices. I was a punk of convenience from start to finish. In 1976, when the New Musical Express advertised for a ‘hip young gunslinger’ and I had just turned 17, I realised instinctively that they were looking for some hot young blood to wet-nurse them, as it were, through the upcoming and somewhat problematic (to a bunch of wet, middle class hippies, that is) punk movement. The only music that existed for me was black music and punk was just about the whitest, most sexless and joyless sound I’d ever heard, but I threw away my dancing shoes and grabbed the safety pins PDQ. Thus began my short career as a hypocrite. But when you’re a stroppy, super-bright working class girl who knows that following one’s mater into the cardboard box factory is DEFINITELY not quite what one is dreaming of, you don’t have the luxury of taking decisions at leisure. Unlike the dreary, late-blooming offspring of the middling class, you don’t faff away your Fruit Salad chew days pissing around with ‘uni’ and gap years and sabbaticals until your mid-twenties. You see a ladder coming down from the
‘copter, and you run towards it – as fast as your bondage pants will allow, of course.
I remember a bit of stuff from that time – but very little of it to do with the glory of the
actual music. I remember coming home to my scuzzy bedsit in – my dear, how divinely
amusing! – ‘Crouch End’, my ears ringing with the latest vile white-thrash cacophony,
and dancing round the room to the cleansing balm of the Isley Brothers. I remember
vomiting in public for the first time – on Snakebite, on the stairs at the Roxy – and being
agreeably pleased that not only was this type of behaviour not held in contempt but
actually encouraged! And I remember that, against all odds, I emerged from it in 1979
with the bare bones of a proper career, as a proper writer, that has served me well to this
very day. That was the bittersweet irony; that we banged on about us being nihilists and
there being No Future, and it turned out that punk was one big stepping stone from the
margins to the mainstream; as I write, John Lydon is advertising butter on TV.
Needless to say, I found Miss Minx’s film far more diverting than actually living through t
hat dirty old racket. Go and see it; you’ll gasp at Gaye Advert’s ageless beauty, you’ll thrill
to Poly Styrene’s timeless piping and no doubt you’ll laugh at my relentlessly silly voice.
And then, if you’re anything like me, you’ll go home and say: “Screw it – where DID I put that Isley Brothers CD…?“ She’s A Punk Rocker UK screens as part of Cinecity, the Brighton Film Festival, on Sat 6 Dec at 4pm at Sallis Benney Theatre followed by a Q&A with the film’s director Zillah Minx (lead singer with Rubella Ballet) and Poly Styrene of X-Ray Spex.
www.cine-city.co.uk

This is a download version of She's a punk rocker that will be sent to your email address after your purchase in MP4 format. Comes with an instant download of the Ballet Bag & John Peel sessions.